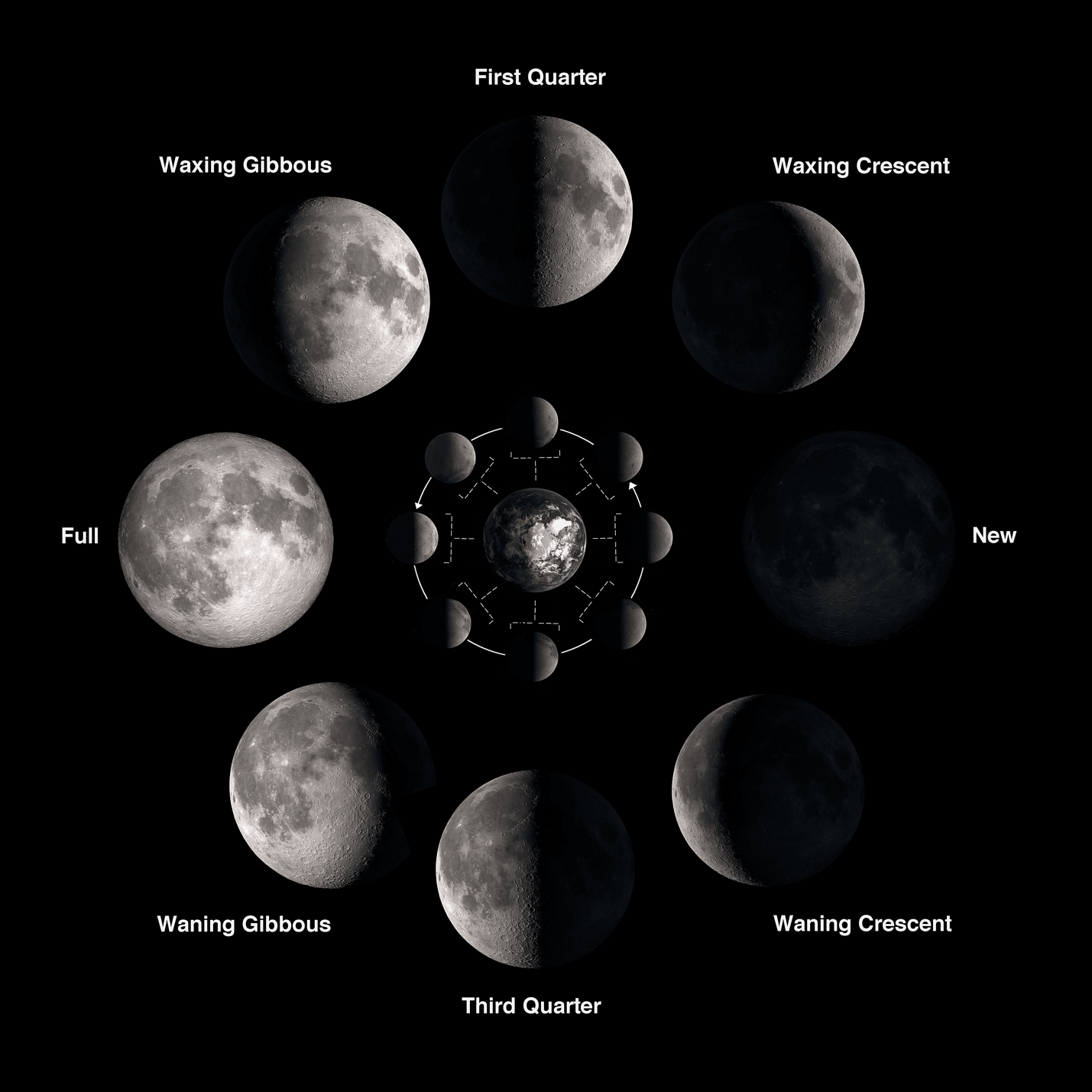 A lunar month is the length of time it takes the Moon to cycle through all of the Moon's phases, from one New Moon to the next New Moon. A lunation is another name for a lunar month, whereas a synodic month is the astronomical word for this time, derived from the Greek phrase synodos, which means meeting or conjunction.

From the precise time of a New Moon, when the Sun and Earth are positioned on opposing sides of the Moon, until the next New Moon, we count the lunar month.

Due to the lunar month's length of 29.5 days, there can be two Full Moons in a calendar month, which is known as a monthly Blue Moon. It's also conceivable that there won't be a Full Moon in February, which would be referred to as a Black Moon.

A sidereal month is the length of time it takes the Moon to complete one orbit around Earth. The word "sidereal" comes from the Latin word "stars," and the term "sidereal month" alludes to the Moon's return to the same location beneath the stars. This takes 27.3 days on average.

The lunar month is divided into four major and four intermediate Moon phases in Western culture.

The New Moon, First Quarter Moon, Full Moon, and Third Quarter Moon are the four principal phases. The major Moon phases take place at a given point in time, while the intermediate Moon phases fill in the gaps.

The average period between each primary Moon phase is roughly 7.38 days (just over 7 days and 9 hours), which is how the 7-day week got its start.

The Roman calendar, for example, is based on the lunar month and is one of the earliest calendars we know of. Even the word month comes from the word Moon.

The Gregorian calendar, which is based on the Earth's rotations around the Sun, is now used by the majority of countries. The present months of September, October, November, and December, on the other hand, are still titled after their ancient Roman calendar positions.

The month begins in Shona, Middle Eastern, and European traditions when the young crescent moon first appears in the evening, following its conjunction with the Sun one or two days previously (e.g., in the Islamic calendar). The lunar month began in ancient Egypt on the day when the declining moon became visible shortly before sunrise.

Others, such as the Hebrew calendar or the Catholic lunar calendar, rely on calculations of differing degrees of intricacy. Because calendars count integer days, months can be 29, 30, or 31 days long, in any regular or irregular order. Lunar cycles are significant in the ancient Hindu 'Panchangam' calendar, which is extensively used in the Indian subcontinent, and are computed with high precision. [requires citation] In India, the month is split into thirty segments called tithis, which run from conjunction to conjunction. A tithi is a period of time that lasts between 19 and 26 hours.

Regardless of culture, all lunar calendar months are close to the synodic month's average duration of 29–30 days, which is the time it takes the Moon to cycle through its phases (new, first quarter, full, final quarter) and return. The Moon orbits Earth once every 27.3 days (a sidereal month), however because to Earth's orbital motion around the Sun, the Moon does not complete a synodic cycle until it reaches the point in its orbit where the Sun and Earth are in the same relative position.

Moonlight is primarily sunlight (with a small amount of earthlight) reflected off the Moon's surface where the Sun's light impacts.

The brightness of moonlight varies widely depending on the lunar phase, yet even the full Moon only delivers around 0.05–0.1 lux illumination. When a full Moon at perigee (a "supermoon") is observed from the tropics around higher culmination, the illuminance can approach 0.32 lux. The apparent magnitude of the full Moon from Earth is only around 1/380,000 times that of the Sun.

Due to the Purkinje effect, moonlight looks blue to the human eye when contrasted to most artificial light sources, especially around full moon.

The bond albedo of the Moon is 0.12, which means that just 12% of incident sunlight is reflected by the lunar surface. It takes around 1.26 seconds for moonlight to reach Earth's surface. Moonlight, which is scattered throughout the Earth's atmosphere, brightens the night sky by diminishing the contrast between lesser stars and the backdrop. As a result, many astronomers avoid observation sessions during the full moon.