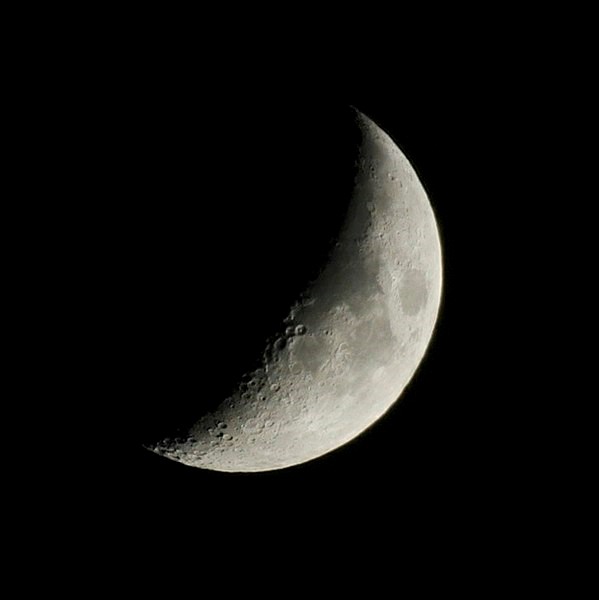 After the New Moon conjunction, when the Sun and Earth are on opposite sides of the Moon, making it difficult to view the Moon from Earth, the Waxing Crescent Moon begins when the Moon becomes visible again. The lit-up portion of the Moon grows from 0.1 percent to 49.9% during this phase.

The term "waxing" alludes to the process of growth, while "crescent" refers to the curved sickle form.

The New Moon is traditionally defined as the smallest sliver of the Waxing Crescent Moon. In certain societies, this ancient concept of the New Moon is still used to determine the start of the month in the Islamic calendar.

Sunlight is reflected as Earthshine

The Moon's surface reflects the Sun's rays, thus half of it is constantly lit up. Every day, the amount of light we can see from Earth fluctuates, and this is referred to as the Moon phase.

Although the Sun only illuminates a tiny portion of the Moon during the start of the Waxing Crescent Moon phase, the remainder of the Moon is occasionally visible. The explanation for this is that the Earth reflects sunlight onto the Moon as a faint glow. Earthshine, also known as the Da Vinci glow, is a natural phenomenon that occurs in April and May.

After the Sun and the Moon, Venus is the third brightest object in the night sky, and it is frequently seen adjacent to the Crescent Moon. It is close to the Waxing Moon when viewed as the evening star in the nights.

The lighted hemisphere – or day side – of the waxing crescent moon is pointing primarily away from us since it is approximately in line with Earth and the sun. Only a sliver of the day side is visible: a crescent moon. The moon appears further from the sunset glare each evening as it moves eastward in its orbit around Earth. In space, it is traveling away from the Earth-sun line. We view more of the moon's day side each evening as its orbital motion takes it further from the Earth-sun line. As a result, the crescent in the west seems to wax or get fatter each evening after sunset.

When the moon is a crescent, you may notice a soft light on the night portion of the moon. The light is known as earthshine. It's created by the fact that any moon people gazing back at our world would perceive a virtually full Earth when they view a crescent moon in the sky. A full or nearly full Earth can brighten the lunar surface in the same way as a full moon might illuminate a terrestrial area. When you see earthshine, that's exactly what you're witnessing.

The waxing crescent moon, represents a summons to action. This is a perfect time to work toward the objectives that are directly in front of you, regardless of the season or month. Take on those piled-up home repair projects, make that unpleasant talk with your boss, or finally get a puppy.

You could be shocked if you assume all of this going-getting would feel forced. Because the waxing crescent moon promotes optimism and faith, even the most adamant pessimists may be more willing to take risks during this phase.